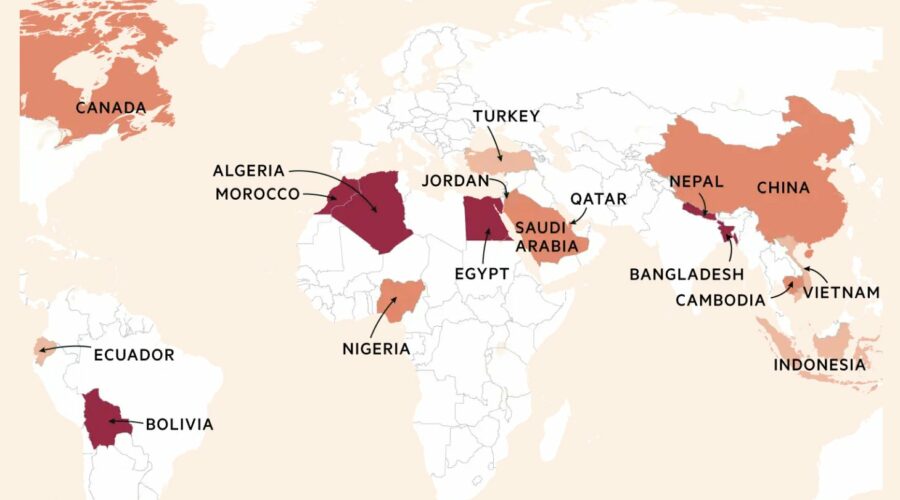 Bitcoin may be the most neutral measure of freedom in the world which no country can accuse of having western bias, unlike some other freedom indexes.

That’s after a map by FT (pictured above) seems to generally correspond to the perception of freedoms in a country and their bitcoin treatment.

Starting with the two odd ones out, Canada has not quite imposed an official bitcoin banking ban as far as we are aware in that there is no circular by the central bank of Canada preventing commercial banks from handling crypto related fiat transactions.

Instead private commercial banks in Canada, like the Bank of Montreal and the Royal Bank of Canada (RBC), decided in 2018 out of their own choice to prevent crypto related credit and debit card transactions, while the government of Canada itself has allowed bitcoin and ethereum ETFs to be listed on the Toronto Stock Exchange.

We’d put them under mostly free, except it is disappointing no Canadian has taken these banks to court for interference with property rights in contravention of the Human Rights Convention.

In our own opinion, we’d have two classifications for Russia. Politically they are clearly mostly unfree with the recent utterly polite protest made of mostly Russia’s middle to upper middle class indicating somewhat vividly an atmosphere of political opression.

Economically however it may be the case Russia is mostly free with no reports of interference in foreign-owened or even domestic property rights ala forced technology transfers or surprise banning of products.

Making them a sui jeneris in a weird combination that maybe can be described as Tsarist economic liberalism.

What stands out the most is just how few countries have outright banned bitcoin. Algeria is or was a dictatorship at what looks like the dawn of freedom with protests there bringing down the previous president who wanted to run for the fifth term by what is being called the Hirak movement.

They just had an election on Saturday, but turnout was just 30%, its lowest in 20 years as the Hirak movement boycotted it after seven of its leaders were arrested on Thursday.

The people of Algeria generally appear to be quite friendly towards Europe with this a developing but rich country, due to oil, that has some pretty nice buildings but also sandy neighbourhoods.

While the general picture of them might be kind of Arab, they’re actually sort of European, with political and economic liberalism there having the potential to thrive, but what actually happens of course events will tell.

Egypt is a tragedy where freedoms are concerned with Europe failing to exercise its influence in its own neighborhood, giving free reign to the then inexperienced Obama.

Politically they’re a dictatorship, sort of a military dictatorship, with the general Abdel Fattah Saeed Hussein Khalil el-Sisi taking charge in a 2014 ‘election’ where he ‘won’ with 97% of the vote and still rules.

He took charge after Egyptians voted ‘wrong’ in bringing the Muslim Brotherhood affiliated Mohamed Morsi to power briefly between 2012 and 2013, so ending what short democracy this ancient land experienced.

Economically Egypt is also presumably unfree since they’ve banned the only used sharia compliant money in existence for reasons probably no one can quite understand except maybe that the 67 year old dictator has no clue about this crypto stuff and is probably too paranoid to allow his people even a little bit of freedom.

Bolivia kind of was unfree in that there were allegations the 2019 election was rigged with protests leading to the ousting of Evo Morales, and now after elections the new president, Luis Arce, claims they have restored democracy.

We’ll believe it when they unban bitcoin with the situation here a bit interesting because it is the central bank that ‘banned’ it by stating in 2014:

“It is illegal to use any kind of currency that is not issued and controlled by a government or an authorized entity.”

2014 is a very different era where cryptos are concerned with it unlikely Bolivia had more than a handful of cryptonians, if that, but the decision to jump to an outright ban does say quite a bit about this country and suggests they are mostly unfree, although that may well change.

The situation in Bangladesh looks a bit fogy. The central bank there issued a warning in 2014 and 2017, warning cryptos are illegal under anti money laundering laws, but it may be this is being misreported as an outright ban and Bangladesh will probably follow India in any event, which apparently plans to classify bitcoin as an asset.

Likewise in Nepal the purported ban appears to be on flimsy grounds with Rastra Bank issuing a notice in 2017 banning bitcoin based on the Foreign Exchange Regulation Act 2019 BS and Nepal Rastra Bank Act 2058 BS.

This is being challenged in court with Nepal itself ostensibly a democracy, but leaning more towards a restrictive democracy perhaps.

Nigeria’s central bank only recently imposed a crypto banking blockade, but this is challenged with it unclear whether China is influencing them on this matter as they basically copied their approach towards cryptos and China apparently lends a lot to Nigeria.

China of course imposed the blockade in 2017. US is now in a trade war with them as the fascist approach of China towards the economy became quiet clear.

The proper term is fascism however much it might seem charged, because it has the same economic model as fascist Italy and Nazi Germany in the leaders of corporations being part of the Communist Party board.

The recent events of Jack Ma also reveal as much in as far as there are no property rights in China, all belongs to the state, but private enterprise is of course allowed, however it has to further the aims of the state.

As bitcoin is outside of the control of the state, naturally such fascist government can not allow its free operation, with it facilitating crypto miners as that serves the aim of the state towards increasing exports, while it oppresses domestic bitcoin consumption because it interferes with their efforts to artificially peg CNY at a far too undervalued rate against the dollar.

We called for a boycott of China back then, but it’s not clear whether such passive action can achieve much. A more nuanced approach is perhaps better that effectively undermines their ban either by crypto exchanges facilitating transactions from within China or by cryptonians going there to talk cryptos and strengthening connections so adoption grows regardless.

The crypto space is still fairly big in China despite this ban, with enforcement being sporadic at best, as there is most likely a political division within the upper echelons most clearly visible by their constant banning and unbanning.

The vast censorship, the lack of political representation or organized debate, the lack of property rights as the state there seems to be claiming the privilege of interfering in any company, and the removal of term limits, among other things, makes China mostly unfree both politically and economically where ownership rights are concerned.

That may change as fascism tends to have some initial strong growth, especially for what was an underdeveloped country, but such growth doesn’t tend to last as organizational advantages quickly give way to mismanagement and capricious actions that distort the market and destroy growth.

Saudi Arabia is a curious one. This is an absolutist monarchy, so politically it obviously isn’t free, but economically they’re kind of free, with news coming out of there mostly positive where cryptos are concerned.

The suggestion there’s a banking blockade is mostly based on a statement issued from their equivalent central bank in 2018.

It’s difficult however to see how that can be construed as a ban, with FT very much biased against cryptos, so they’re probably leaning on flimsy grounds.

In the very aligned United Arabs Emirate, Dubai’s property giant Emaar began accepting bitcoin in 2019 and then even planned to launch an ethereum token.

Saudi Arabia moreover has its money pegged to the dollar, so they don’t have their own monetary policy, making bitcoin a reasonable hedge.

Overall therefore going by this picture much of the world is generally free, at least economically, except most notably China which has a very oppressive governance model where the economy is concerned.

Outright economic dictatorships seem to be very rare, with mostly shades of restriction as liberty generally seems to dominate the world over at least economically.