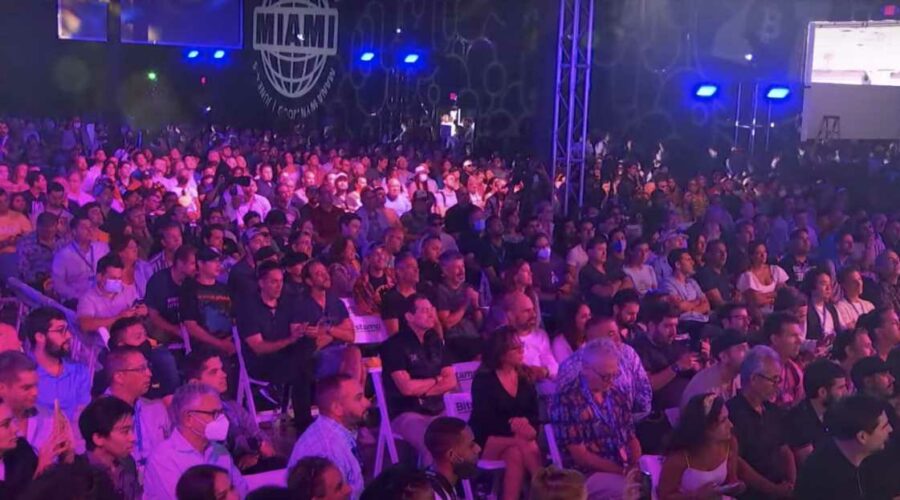 For the first time in the history of bitcoin conferences, we had hecklers. This new creature that didn’t exist until now makes its appearance at the dawn of the crypto 90s.

It’s still 80s. Some again compare our current time to the dotcom boom, but cryptos remain dial-up. That will change, we will have crypto broadband, but it remains the case that we’re still quite before the dawn, before the diktatas of Zuckberg or whoever runs gulag.

It’s the best of time and there is no worst part to it, but arguably it is the most dangerous time as we are at a stage and at a brief window where our decisions currently made are stratified for the end of time as far as we are concerned.

We risk dilution and seduction, a fall to the same temptations as those 90s rise to now dictators, but we’re still in control.

And not just in control, but in a dawn of quiet celebration as the most astonishing characters break the stuffy mold of the typically utterly boring bitcoin conferences to declare and loudly so, we rule and shall keep ruling the waves.

It was a delight to hear Ray Youssef, the CEO of Paxful, at Bitcoin Miami because it’s his first time out and he happens to be quite a character.

With much substance. He’s an Egyptian American who got into bitcoin when it was three or four cent he said, and has seen his bitcoin exchange mostly used for remittance, Paxful, grow significantly in Africa and especially Nigeria.

Nigeria can’t stop bitcoin, he said, claiming that the $2.5 billion remittance to the country fell to $50 million after the central bank there issued an arguably unconstitutional diktat.

It was a missed opportunity for the Bitcoin Magazine guys, the organizers of this conference, to get someone competent to pick his brain in an interview, but he brought with him the organic energy of Nigerian developers and people, who appear to have grabbed this bitcoin and run with it.

Sam Bankman-Fried was another interesting revelation as the man sounded nothing like we pictured and came across as a geek very fitting for this space.

Bankman declares war on dexes, is one headline we might have written with Bankman saying you can’t have a latency of nanoseconds on a dex.

He took over Sushi so arguably his exchange, FTX, is hedged with officials further announcing the Miami airport arena was to be renamed after FTX.

Then you have these guys, the bitcoin maxi or nazi, who back in 2018 had milk of different color at a bitcoin conference in overt racism.

A platform for these idiots shared with Senators is a curious choice and an attempt to mold a fighting for preservation focus instead of fighting to win.

A few years ago, in their seat would have been geeks talking about the monetary and banking system and the problems it causes and how bitcoin is a solution.

Their replacement with pretty but dum faces is a degradation that necessarily invites a revolt.

This is why we love these guys. An utterly boring conversation by Aaron van Wirdum of Bitcoin Magazine and some other guy was interrupted by what looks like a 17 year old who was dressed in a suit and then took the stage to reveal his actual costume shouting DOGE TO THE MOON.

Thank god, because otherwise it would have been yet another boring bitcoin conference and because more importantly it hits a certain perverted narrative on the head by showing we are unscripted legions.

Floyd Mayweather had an eth t-shirt too going around, but this seclusion is not quiet a change, it has always been around.

What is arguably a slight change is the fact they decided to have some Scottish guy recite poems. Guess bitcoiners too want dem nice tings huh.

At least that’s what we think he was doing. We didn’t sit to hear the whole thing, just segments and they all happened to be poems.

Which is a change because they didn’t come with NFTs, and because it speaks of a fluxing bitcoin that is astonishingly varied.

And confident. WE”RE NOT SELLIING by Max Kaiser is of course what may in some ways define this 2021 in part, because it encapsulates fully the mood and the spirit of an ascending tribe.

The tribe of plebs and techies, intellectuals and dumheads, actual nazis and actual communists as well as the pen of liberalism. Of Senators and convicts, Shrem.

A festival, of timid shouting, as the crowd becomes prettier, but still ruled by weird.

There were plenty of missed opportunities, but then there are still no diktatas, so may that comfort of boring entertainment keep on, that authenticity of just guys doing bitcoin things.

For while we may be up, the story of many of these men and some of these women is the kid around the block, the normie intellektual, who now just happens to be on the stage and will do whatever he or she wants, even the dum ones.

This is what a peaceful revolution looks like, a mess with gems and an unruly crowd having fun without mum or daddy to shout because they partying too.

Long may it continue, but soon we’ll have sophistication and what happens between now and then as bitcoin enters its teenage years can decisively matter on whether we freed ourselves or were cheap enough to seduce into enslavement.

06/06/2021 Bitcoin Comments Off on Bitcoin Miami, The Best Conference Yet?
Markets