Surely, Verge’s (XVG) crowdfunding campaign would have not been a timely successful one if not for the contribution of an Angel Investor in a new currency known as TokenPay who underpinned the big share of the achievement.

Of the total fund generated, TokenPay tagged “world’s most secure coin and has been called Bitcoin on Steroids” shouldered a big sum of 66.5 million XVG.

Prior to the event, the cryptocurrency had promised to unveil a mystery partnership if the campaign was successful within the slated date.

Completing the task within the date, people’s curiosity for the announcement rose to the peak while Verge community dashed their anticipation, stating that it will disclose the partnership on April 16.

As time flies, and the days seem like a month of Sundays, nothing seem to be clear to the crypto lovers but just a gesture from the altcoin signaling the mystery partnership might involve the angel investor –TokenPay.

VergeLife, in a tweet on April 4, stated TokenPay’s thought for donating to Verge. 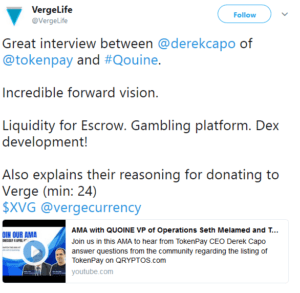 Not the end, giving a clearer vision on the mystery partnership, on April 8, TokenPay tweeted stating:

“#TokenPay CEO @derekcapo meeting in Munich earlier today for breakfast with key stakeholders of the German bank. A deal in principle has been agreed upon by all parties. We will provide full details at closing, but can say that $TPAY and $XVG debit cards are likely coming soon.” 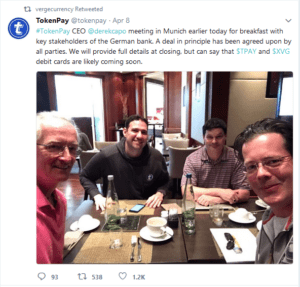 On Wednesday April 4, the “secure and anonymous” altcoin’s integrity was once questioned again after the previous hack on its twitter account.

The heist was made successful as the hackers took over 51% of the network’s Hashrate, carting away over 250,000 verge according to Ocminer’s post on Bitcointalk forum.

Subsequent to the raid, the development team behind Verge stated that the event has forced them to propose a hard for the altcoin in a bid to make it less vulnerable and live up to its billings.

On April 7, Verge tweeted that it has successfully hard forked the currency.

“We have successfully forked! **We are not doing any ETH give away’s, as seen below by spam accounts** $XVG #vergefam.”

Just today, Verge made an announcement on its Twitter holding that it has successfully solved its vulnerability problem.