The cryptocurrency market continues to go strong after Thursday’s action-packed rally in Bitcoin (BTC) and Ethereum (ETH). As these two crypto giants are taking a momentary break and consolidating, XRP has taken the charge surging 5.7% trading at $0.59 at press time.

Besides, there have been other interesting developments as institutional actions continue ahead. Here are the top three stories today in Crypto.

Coinbase Files for an IPO With the U.S. SEC

Earlier today, cryptocurrency exchange Coinbase submitted the draft registration to the U.S. Securities and Exchange Commission (SEC) for an initial public offering. The announcement comes just at a time when Bitcoin (BTC) has been smashing past new records every day.

Launched in 2012, Coinbase now has over 35 million people across 100 countries trading in crypto. The exchange has more than $300 billion in total traded volumes with over $25 billion worth of assets on the platform. As per Messari researcher Mira Christanto, Coinbase can seek a valuation anywhere close to $28 billion.

Messari’s prediction of Coinbase valuations comes considering all factors like custody fees, trading fees, and other criteria. Well, if the valuations turn out to be true, this could be one of the biggest IPOs beating tech and financial giants like Visa and Facebook.

Bahamas central bank digital currency (CBDC) Sand Dollar is now live as the entire population of 390,000 can use it to make payments across the country. Transaction for the Sand Dollar happens through a native application. Speaking to Reuters, Dawn Sands, owner of NRG – a cafe in Nassau – explained the first-hand experience of using the Sand Dollar. Sands said:

“It’s instant – I get a message, and it’s received. Once people get comfortable and educated, I think it’s going to be big.”

While The Bahamas is a very small country, the Reuters report suggests that the world’s top central banks are closely watching these developments. This includes the U.S. Federal Reserve, Bank of England, the European Central Bank, and the People’s Bank of China (PBoC). All of the central banks have been working on the CBDC at different scales.

The rollout of Sand Dollar by The Bahamas is offering central banks the necessary insights into how CBDCs can work in real, right from onboarding users to helping businesses cut on transactional costs. Philip Middleton, deputy chairman of the OMFIF central banking think-tank in London said:

“Everybody is interested in it – I think it’s arguably the first step. If I’m looking for lessons learned for the big boys, it’s the whole education piece – if this is successful, how have you persuaded the population to use this?”

Below is an interesting chart of how and at what stage are the global central banks working on CBDC. 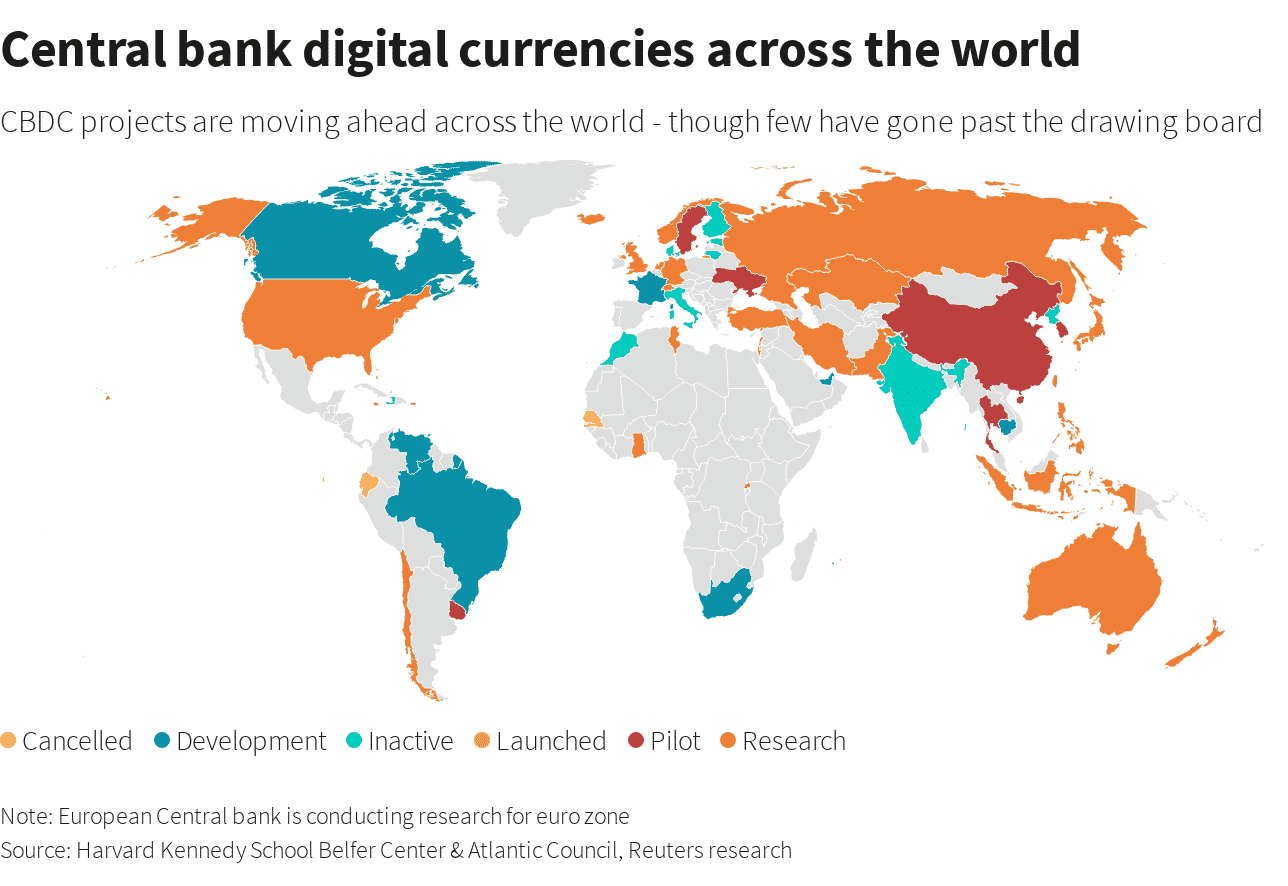 Christopher Woods, head of equities at Jefferies trims his gold exposure in favor of Bitcoin (BTC)

Christopher Wood, global head of equity strategy at Jefferies joins the ‘Bitcoin-over-Gold’ community. In his long-only global portfolio of USD-denominated pension funds, Woods has trimmed his exposure to Gold while increasing the exposure for Bitcoin. In his weekly note to investors, GREED & fear, Woods writes:

“The 50 per cent weight in physical gold bullion in the portfolio will be reduced for the first time in several years by five percentage points with the money invested in Bitcoin. If there is a big drawdown in bitcoin from the current level, after the historic breakout above the $20,000 level, the intention will be to add to this position”.

More and more institutional giants have warmed up to BTC in recent times. Previously, JPMorgan said that Gold can suffer for years because of Bitcoin. However, defying this opinion, Wall Street giant Goldman Sachs said that Bitcoin is no threat to Gold.