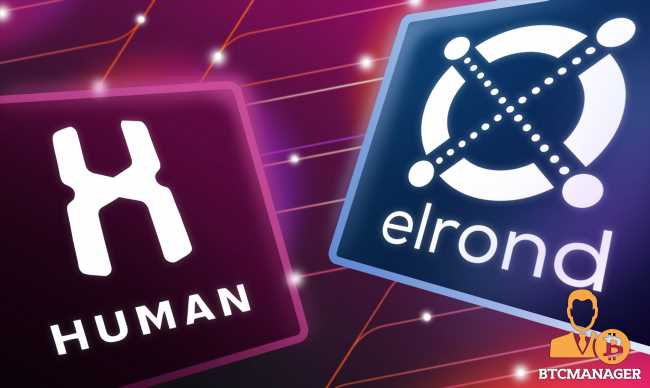 HUMAN Protocol has announced its migration to the Elrond (ELGD) blockchain network. The team says the high throughput, cost-efficient transactions, and carbon-negative nature of Elrond will make its mission of reinventing the way humans and machines work together, easier, according to a press release on August 9, 2021.

The Human Protocol, a blockchain project that claims to be focused on ushering in the next evolution of machine intelligence and reshaping how people work through distributed job markets, is joining forces with Elrond Network, a distributed ledger technology (DLT) platform aiming to onboard the masses into the new global economy via its internet-scale blockchain solutions.

Initially powered by Ethereum, the HUMAN Protocol’s primary objective is to connect the world’s workforce to the limitless demand for human annotations of raw data, thereby providing job opportunities for millions of people globally, while also effectively tackling the enormous need for human reasoning in the development of revolutionary artificial intelligence (AI) systems.

However, the team has hinted that the scalability bottlenecks of Ethereum made it almost impossible for HUMAN Protocol to achieve its full potential and as such, it has now turned to Elrond, a highly scalable network capable of processing 15,000 transactions per second, with the ability to scale to 100,000 TPS through its Adaptive State Sharding technology.

“The Elrond Network throughput can enable HUMAN Protocol to operate as we originally envisioned, by allowing us to enable features for which there simply wan no blockchain bandwidth. Elrond’s capabilities have captured our imagination for new features and designs. Elrond’s technical brilliance can unhinge the potential of the Protocol; this kind of innovation can help us as we seek to transform the way humans work.”

HUMAN Protocol brings to life a blockchain-based labor marketplace comprised of “Requesters” and “Workers.” Requesters are responsible for sharing tasks that require human reasoning, while Workers solve these tasks and earn HMT tokens.

The tea says Human Protocol has integrated a plethora of innovative tools from third-parties into the platform, including hCaptcha, a privacy-preserving, anti-bot solution that rewards websites and Computer Vision Automation Tool (CVAT), which makes it possible for data exchanges on HUMAN Protocol to support a vast array of data processing needs, while also rapidly making jobs available to Workers according to their skill sets.

Importantly, the team has made it clear that it expects the collaboration with Elrond to enable HUMAN Protocol to take advantage of the unique features of the smart contracts platform, including its smart accounts, low latency, and more, to onboard millions of users into decentralized work pools and dispense billions of rewards as micropayments.

“With hundreds of millions of people powering through the immense workload required for training neural networks, the field of machine learning is set to make huge progress. We’re excited to contribute the Elrond Network capabilities to the HUMAN Protocol mission and establish a global network of workers operating at an internet scale.”

At press time, the price of Elrond (EGLD) is trading around $127.74, with a market cap of $2.43 billion, according to CoinMarketCap.