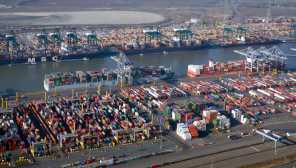 Transportation and logistics have long been seen as a perfect fit for blockchain technology. It is estimated that before the end of this decade most of this sector will be almost entirely blockchain based, creating both tremendous savings as well as improving security and trust. The food industry is clearly taking notice, with producers across the globe rapidly adopting distributed ledger systems. This move promises to significantly improve the security of the world’s food supply.

As the world’s population has skyrocketed over the past few decades, so too has agricultural production. In fact, global hunger is at its lowest point since before World War II, and per capita caloric intake is expected to rise for the foreseeable future. This good news is offset by the fact that more than ever populations are relying on imported food, with subsistence farming in a steep decline. Thus, to keep up with increasing demand, farmers must find ever more efficient means to move their crops to consumers.

It is little surprise that blockchain platforms are quickly moving into the agricultural space. IBM Food Trust is becoming one of the most significant players in the sector, with partnerships that include grocery chains, distributors, and producers. Food Trust is built on Hyperledger, and ideally will enable secure transparency across the entire supply chain from grower to consumer.

VeChain is emerging as another significant player in the agricultural blockchain space. Along with partners DNV GL and AGI Group, The VeChain Foundation has created FoodGates, which it calls a “cross-continental logistics and trades solution.” This platform is making significant traction, with partners across Europe and is expected to be a key player in a significant trade agreement between France and China.

Given the scale of the global food economy, the blockchain applications are set to be enormous. Securely tracking food can help improve safety, eliminate waste, and prevent counterfeiting and theft. Blockchain could also make production vastly safer and more efficient by enabling farmers to use fewer chemicals and water, and share important data that could affect crop yields. Ethereum and Iota are two other platforms with projects under development that address these topics.

As with other areas of the blockchain space, whether or not the sector consolidates around one platform, or supports several remains to be seen. This transition will be complex, and each system has its unique characteristics. It could be several years before this question is answered, and in the meantime various players will explore their options. Walmart, for example, is using both VeChain and the IBM Food Trust.

Distributed ledger technology is now being used to track food products including wine, nuts, and beef. Before much longer it will be a standard element of the entire global food supply. Its adoption is an excellent example of how blockchain’s reach is much more vast than finance and cryptocurrency, as well as how it extends into almost every aspect of modern life.