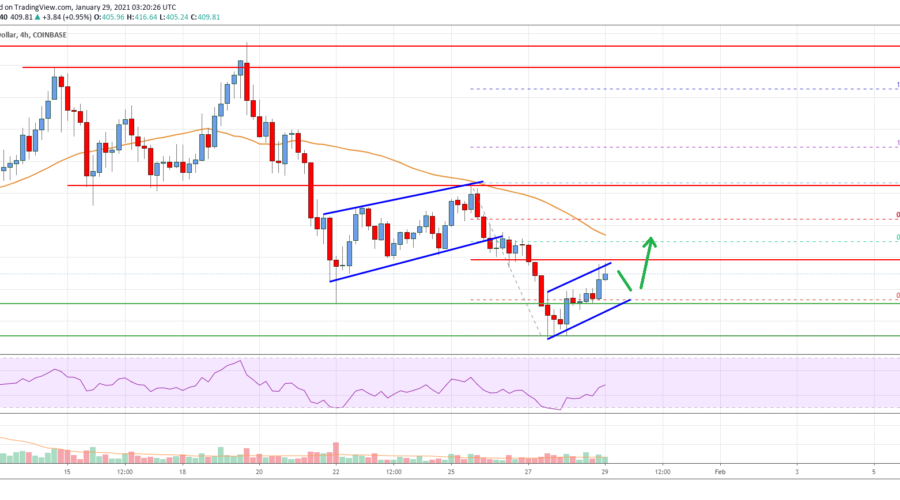 Bitcoin cash price is struggling to gain momentum above $400 against the US Dollar, while bitcoin climbed 10%. BCH/USD might correct above $420 unless it dives below $390.

After struggling to clear the $465 resistance and 55 simple moving average (4-hours), bitcoin cash price started a fresh decline. BCH price formed a high near the $466 level and declined sharply below the $440 and $420 support levels.

During the decline, there was a break below a rising channel with support near $430 on the 4-hours chart of the BCH/USD. The pair even spiked below $400 and settled well below the 55 simple moving average (4-hours).

A low is formed near $371 and the price is currently correcting higher. There was a break above the $385 and $390 levels. The price also recovered above the 23.6% Fib retracement level of the recent decline from the $466 high to $371 low.

It seems like there is another short-term rising channel forming with support near $390 on the same chart. If there is an upside break above the channel resistance at $418, the price could correct further higher. The 50% Fib retracement level of the recent decline from the $466 high to $371 low is also near $418.

Looking at the chart, bitcoin cash price is clearly facing many hurdles near $420 and $440. Overall, the price could recover above $420, but it might face a strong resistance near the $440 level.

4 hours MACD – The MACD for BCH/USD is slowly gaining pace in the bullish zone.