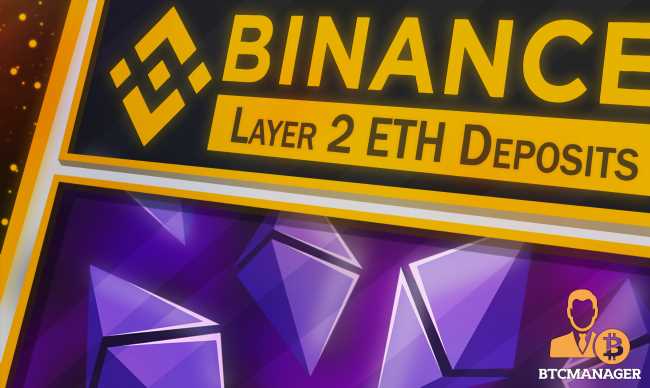 Binance, a leading cryptocurrency trading platform by reported trading volume recently announced that it had integrated support for the Arbitrum One core network along with opening deposits for ether (ETH) on the Arbitrum One layer two.

For the uninitiated, Arbitrum is a leading layer-two optimistic rollup protocol that leverages an off-chain Ethereum contract to enable lower transaction costs and lightning fast transaction speed compared to the Ethereum mainnet.

According to the announcement, Binance users can now deposit any ERC-20 token from the Ethereum network via Arbitrum at a fraction of the cost they would have to pay otherwise.

“Binance completes the Arbitrum One mainnet integration and has opened deposits for ETH on Arbitrum One Layer 2. Please find your assigned ETH deposit addresses on the Aribitrum One Network in the Deposit Crypto page,” the announcement reads.

Further, Binance added that it will enable ETH withdrawals on the Arbitrum One Network layer two in the near future.

Notably, Binance’s integration of Arbitrum is a significant step forward in the wider adoption of Layer-2 Ethereum scaling solutions. While other scaling solutions such as Polygon (MATIC) already exist, they are not exactly the same as the likes of Arbitrum or Optimism due to stark differences in technical architecture.

A Much Needed Integration

Binance integrating Arbitrum is a welcome development at a time when Ethereum transaction costs have become a major point of concern for the blockchain’s users.

A simple token swap transaction on the leading Ethereum-based decentralized exchange (DEX) costs upward of $100 according to current gas fees, indicating the unfeasible nature of the Ethereum blockchain at present.

The skyrocketing transaction fees on Ethereum have given room to other Layer-1 blockchains such as Avalanche (AVAX) and Solana (SOL) that continue to witness wider adoption on the back of low transaction fees and high throughput.

However, the Ethereum community would hope that with the wider adoption of Layer-2 blockchains such as Arbitrum and Optimism, small users would finally be able to afford the leading smart contract platform without worrying about the worrisome gas fees.